Speak up for better bike connections in Māngere!

Māngere could and should be cycling nirvana: easy flat terrain, lots of schools and churches, great local town centres, and stunning parks and natural features (go ask that maunga!). But while a few excellent cycling projects are falling into place, there’s no safe network to link everything up.

We could all help change that. Auckland Transport’s new plans for Māngere, out now for consultation, promise to link up all the key destinations where people work, play, learn and gather.

We’re all for it, with adjustments here and there. And we’re asking you to speak up and support it too.

The feedback form is short – here’s the link. Or follow the button below to make it even easier:

Read on for more information about the project…

Māngere by bike is getting better all the time!

So many new cycling bits and pieces have been built and are underway around the edges of Mangere, it’s easy to get excited. The new ‘old’ Māngere Bridge for active modes; the new Norana pathway and boardwalks along the Māngere Inlet; the separated cycleway along SH20A to the Airport; Māngere Town Centre’s Te Ara Mua cycleways; the planted shared paths on Airport land; and a new separated cycleway under construction on SH20B linking SH20 and Puhinui Road.

They’re all popping up in a neighbourhood with flat terrain, easy distances between community destinations like schools, churches, and the two town centres at Māngere Bridge and the Māngere Centre, and Kāinga Ora’s new terrace houses and apartment building programme

And the people! Māngere has growing residential areas where family and community are one and the same, huge employment opportunities at businesses based around the Airport and at Airport Oaks – and the astounding work of Teau “Mr T” Aiturau and Triple Teez, in organising events and providing bikes for kids and families in Māngere.

All signs seem to point to bikes as a great transport choice. But there’s a huge missing factor. Kāinga Ora’s apartment project on McKenzie Road. Quality homes and great biking: we can help get the dots joined.

Where are the safe routes connecting Māngere’s destinations and its patchwork of new and emerging bike projects?

How do locals and visitors get safely on bikes to and from the new Māngere Bridge, through Māngere Bridge Village, along Coronation and McKenzie Roads with their busy intersections, along Bader Drive to Māngere Town Centre?

If you’re headed to school (whatever your age), what’s your ride like to get to local schools reached via Māngere Centre Park, or across David Lange Park and past the Intermediate School to join the SH20A cycleway?

And it’s not far from most Māngere neighborhoods to thousands of jobs along Kirkbride Road and at the Airport. But without safe connections, would you get there by bike – or let someone you care about give it a go?

We have one more question that’s really an answer: what if someone linked it all up for biking?

And now, Auckland Transport has published plans to do this very thing.

Māngere Cycling Improvements out now for consultation connect from north to south and east to west – linking Māngere Bridge with workplaces around the Airport, Central Park and Mangere Town Centre, and passing the gates of schools and parks and nearby churches. It deserves our support.

It’s not perfect, but as as a much improved, safer cycling network, we give it a big tick. It’s a great basis for building cycling routes that take people where they want to go.

The project in detail

Here’s a helicopter view of what’s in store: 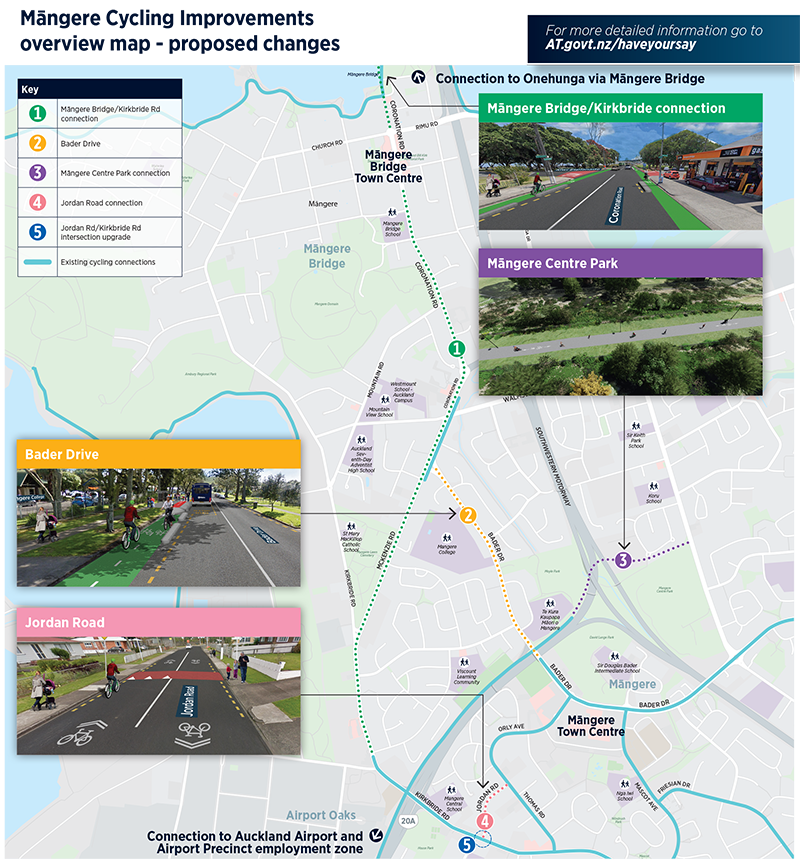 The big stuff for this project comes in three main parts:

Apart from these big fixes, a smaller road upgrade is planned to slow traffic speeds and improve cycling safety on Jordan Road, an important link between the cycleways of Te Ara Mua and to Kirkbride Rd near SH20A. 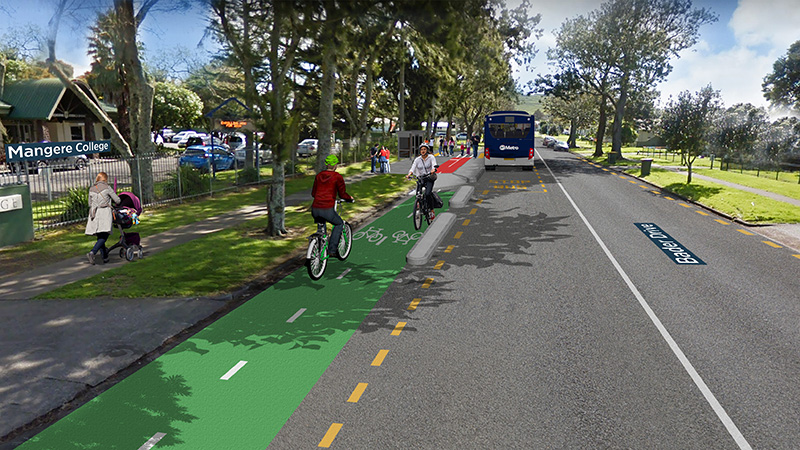 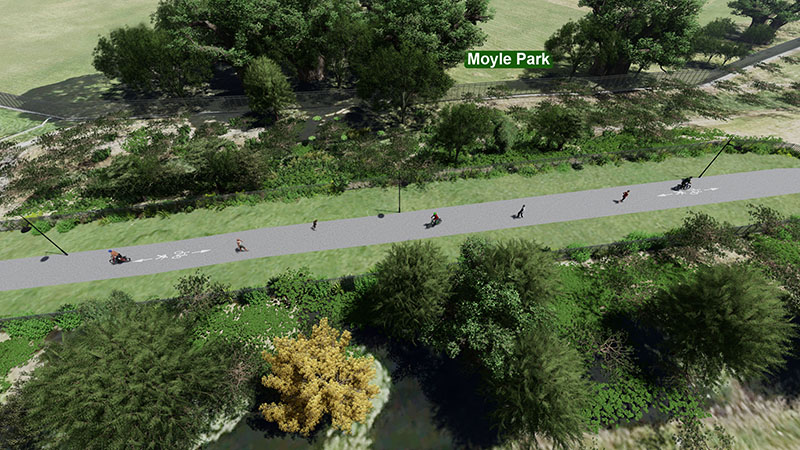 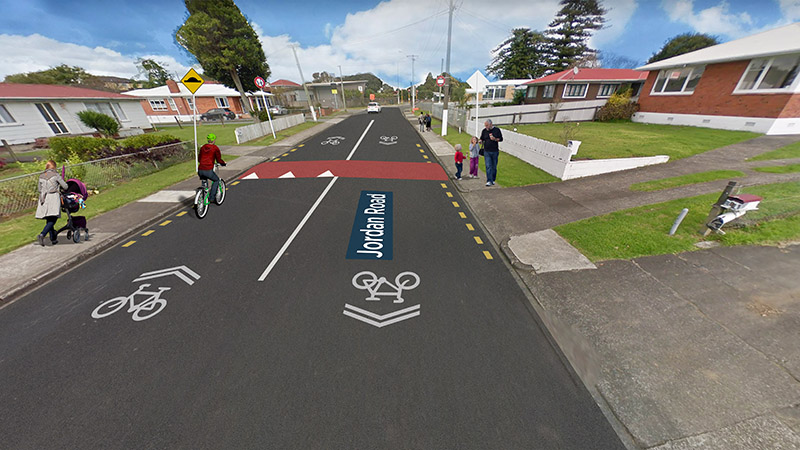 It’s a massive improvement to the disjointed (or non-existent) infrastructure that currently makes biking between key Māngere destinations unsafe and unattractive.

And it gives visibility, safety and separation for people on bikes to protect them from busy traffic and heavy vehicles, which increasingly dominate the key connections between those destinations along Coronation, McKenzie and Kirkbride Roads.

Do we have questions?

There are safety, aesthetic and parking issues that need more discussion to ensure this project creates the safe, unified network Māngere needs: McKenzie Road by the Strawberry Farm, showing unused shoulder space – but not for long!

We’ll be raising all of these matters in Bike Auckland’s submission, so we can work with Auckland Transport to fine-tune and get an even better result for the project.

All we ask of you is to respond to AT’s consultation to give the project the support it deserves!

Suggested items to cover are listed in our Quick Submit Guide below – make yourself heard by Sunday 13 December.