Giulia Rodighiero bikes to town along what we at Bike Auckland think of as the ‘missing highway’ – from the south into the CBD. In this photo story, she shares the good, bad, and the ugly of her commute…

I recently moved from Mt Albert to Manurewa, which changed my work commute to K’Rd from a relatively quick and safe 7km via the Northwestern cycleway, to a 24km trek through areas with almost no cycle infrastructure. Luckily, it’s easy to take my bike with me on the train to Newmarket, from where I ride to work. (I bring my bike because it’s much quicker, fun and cheaper to bike from Newmarket to work than getting a bus after the train).

However, it’s not as much exercise as I was doing before, in my hilly commute from Mt Albert. So I needed to add some kilometres to keep me fit, and I decided to cycle all the way from Manurewa to K’Rd a few times per week. I chose to do this via Great South Road, because it’s the most direct and fastest route.

Even if the ride is quite long (at least for me!), it’s relatively flat and not as tiring as I thought it would be. It definitely needs some improvements from the safety point of view, although there are already some good sections. My ride actually starts really well: from my residential street, I turn into Browns Road, which has a painted cycle lane in both directions. The cycle lane continues into Great South Road where almost immediately it becomes a wide shared path. Unfortunately the path surface is not very smooth, and most of the other cyclists I meet prefer staying on the road. It’s the only separated cycle lane of my ride until Carlton Gore Road in Newmarket: I use it and try not to be too fussed about the surface or about all the zig-zagging they make you do at the intersections. The shared path turns back into a painted on-road cycle lane after Manukau Station Rd, and it pretty much continues until just before the Papatoetoe shops at Hunters Corner. There wasn’t much traffic on the day I took this picture, but when there is (and there usually is), it’s a bit of a challenge to claim my space between the parked cars, cars queuing at the traffic lights and trees planted along the way. At the end of the shops comes the first really stressful spot of the ride: the intersection with Shirley Road, where I am supposed to merge with the cars entering the road (at speed) from my left. I generally prefer avoiding this by using the pedestrian crossing instead. Immediately after this intersection, a bus lane appears until the intersection with Baird Rd, where there’s the first of a series of really short sections of painted cycle lanes, which appear and disappear. I’m not sure whether to take them as a joke or good intention. From here onward, I have to start deciding whether to take a risk and ride on the road, or whether to use the footpath. It really depends on the traffic of the day. As I approach and travel through the shops at Otahuhu, the footpath is not an option anymore – but at least the cars now have to slow down, so riding on the road is not too bad. After Otahuhu shops the worst part of the ride begins: a very industrial area with heavy traffic, both cars and trucks. Luckily there is quite a nice and wide footpath for most of it, which I unashamedly use… 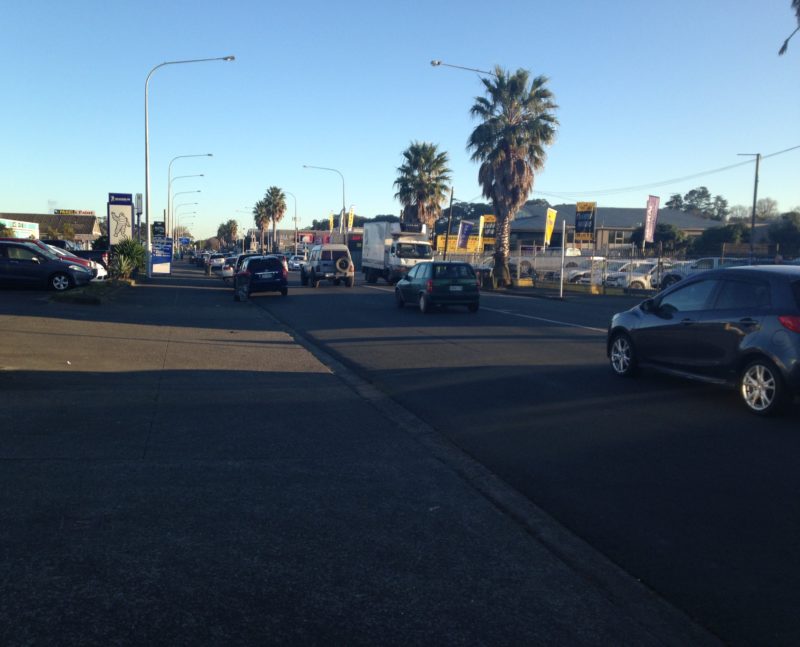 …taking away with it also the actual footpath, for two or three hundred meters! What do you do if you’re trying to walk along here?? I’m always a bit relieved when I see Penrose Station because I know that the worst is over. I stay on the footpath until after the big intersection with Station Road. After that, I feel safe again on the road, mainly because the cars appear to drive slower. I’m not sure if maybe the speed limit changes back to 50km/h here, or if it was 50km/h all along. From Greenlane it’s again a relatively safe ride thanks to the bus lane, which re-appears from the intersection with Campbell Rd and pretty much continues all the way. A couple of times, because of the cars stuck in the queue, I felt like I had to get out of the way onto the footpath to let the bus pass me, but generally I never have problems. I finally leave Great South Road and turn into Maranui Ave (not always an easy task), where I ride on the overbridge to get to Dilworth Avenue and Remuera Rd. From Newmarket Station, it’s the same route that I travel when I bring my bike in on the train, and that I’m sure many readers are familiar with: Broadway, Carlton Gore Road, Park Rd, across Grafton Bridge and finally onto K’Rd! It’s always very satisfying arriving at work and jumping into a well deserved hot shower. Some part of me is also relieved that I managed to arrive safe and sound once again. I know that improvements to the cycle infrastructure of South Auckland are still very far away… but I’m already dreaming of a day when you’ll be able to cycle all the way from the southern suburbs to the city via a safe, uninterrupted, separated cycle lane. 8 responses to “The great northward commute on Great South Road”