Fear’s fair – but how rational is our risk assessment?

Keen to ride your bike around town, but worried it’s a risky business? You’re not alone, and that’s why we work for safer streets for people on bikes. But hold up! When you crunch the numbers, even under current conditions, riding a bike is not nearly as dangerous as you might think, compared to other things we get up to.

As reported in the NZ Herald, new research from a team led by Prof. Alistair Woodward at the University of Auckland shows that biking is about as safe as doing DIY around the house. We’re glad to be able to share Alistair’s own blog post on the project (also published at Sciblogs)….

“It is too dangerous” is the reason given most commonly for not riding a bike on the road in New Zealand (Legge and Landtroop, 2013). About half of New Zealand households own one or more bikes in good working condition, and most trips in the city are relatively short, but only 1-2% of those trips are made by bike (Ministry of Transport 2015).

In a study that was published last week we set out to determine how big the risk of injury due to cycle crashes actually is, and how it compares with injury risk of other common activities in New Zealand.

What should these comparisons be based on? Risk per hour, per kilometre, per head of population? We have used the notion of a “standard dose”. We were inspired by Prof David Nutt, an English physician and researcher. Nutt thought the regulation of psychotropic drugs should be in proportion to the damage these drugs caused, and he compared the probability of serious ill-effects per standard dose (what a user would commonly ingest) with the risk of injury during a typical day of horse-riding (Nutt 2009).

We proposed a standard dose of cycling might be a 30 minute trip, 3 times a week. This is rather more than the average cyclist in New Zealand presently spends on his or her bike, but fits with what national and local governments aspire to achieve in the near future (Auckland Transport, for instance, aims to triple the number of journeys by bike in the city in three years).

The comparison activities we selected were snow sports, do-it-yourself (DIY) activities in the home, rugby, horse riding and using quad bikes on farms. These were chosen on the basis that they are common, and there are data available on both person-time exposure, and the rates of injury. We used two injury outcomes. Injuries sufficient to cause the person affected to visit a hospital emergency department, and injuries that lead to a claim being made to the Accident Compensation Corporation (ACC).

We found the risk of injury while riding a bike is actually very small. Taking injuries that lead to claims to ACC, we found these occur roughly 9 times in every 100,000 short urban bike trips; the chance of receiving an injury sufficiently severe to cause a visit to the hospital was similar. If you rode a bike three times a week, most weeks, the chances are you would suffer one moderately severe injury every 70 years.

We estimate the risk of injury on a bike is similar to the risk associated with DIY activities in the home, more than a 100 times less than the risk of snow sports, and 500 times safer than playing rugby (see Figure 1, which uses a log scale).

There are many assumptions and approximations in these results, so they should not be treated as precise measures. But the take home message, we suggest, is that riding a bike on New Zealand roads is not particularly dangerous (1 moderate injury in 70 years!), and indeed the risk is considerably less than that associated with some other common activities. (Many parents are reluctant to allow their children to ride to sports, but the bike trip is roughly 500 times safer than a game of rugby, for instance).

Risk is a construct – how the figures are presented affects the way they are perceived. The risk of injury per km travelled by cycle on New Zealand roads is higher than that for automobiles but the difference is reduced considerably if automobile casualties include those injured by cars as well as those injured in cars, and if travel on motorways is excluded (given that motorways are low risk environments, with no equivalent for bikes). For some sub-groups (eg, young men) the risk of injury in a car is greater than that when travelling by bike, yet bicycles are not seriously promoted as a means of reducing crash injuries among the young (Mindell et al 2012). The rate of a fatal injury per kilometre is higher for pedestrian travel than either cars or bikes (Shaw et al 2016), yet few people are put off walking by fear of traffic crash injury. Also, think of this – travelling by private motor car is an order of magnitude more dangerous, in terms of crash injuries, than going by public transport, but this is seldom used as an argument for more buses and trains. And why focus just on injury? If deaths from all causes are counted, cycling is a good deal healthier than driving in a car, as premature deaths avoided by extra physical activity (via reducing heart disease and cancer risk etc) exceed by roughly 20 to 1 cycling-related injury deaths (Lindsay et al, 2010).

So why does fear of injury deter so many people from getting around on a bike? We suggest the first point is that the probability of something happening is, on its own, a weak motivator. Statistical risk only makes sense when it is filtered and interpreted through personal perceptions and social frameworks. Daniel Kahneman won a Nobel Prize in Economics for his work on what he called the “psychophysics” of risky choices, which he suggests are conditioned strongly by expectations and framing (Kahneman and Tversky, 1984).

In the same vein, we argue that fear of riding a bike is primarily a consequence of living with a transport system that is dominated in every way by the motor car. The bicycle has literally been pushed to the margins (Figure 2) and the environment sends a powerful message, that such use of the road is unusual, different, and is not valued. The transport norm is reinforced in other ways. For example, cycling promotion campaigns with safety-oriented messages such as “Share the road” have, perhaps unwittingly, strengthened the social framing of cycling as an activity that is inherently dangerous. 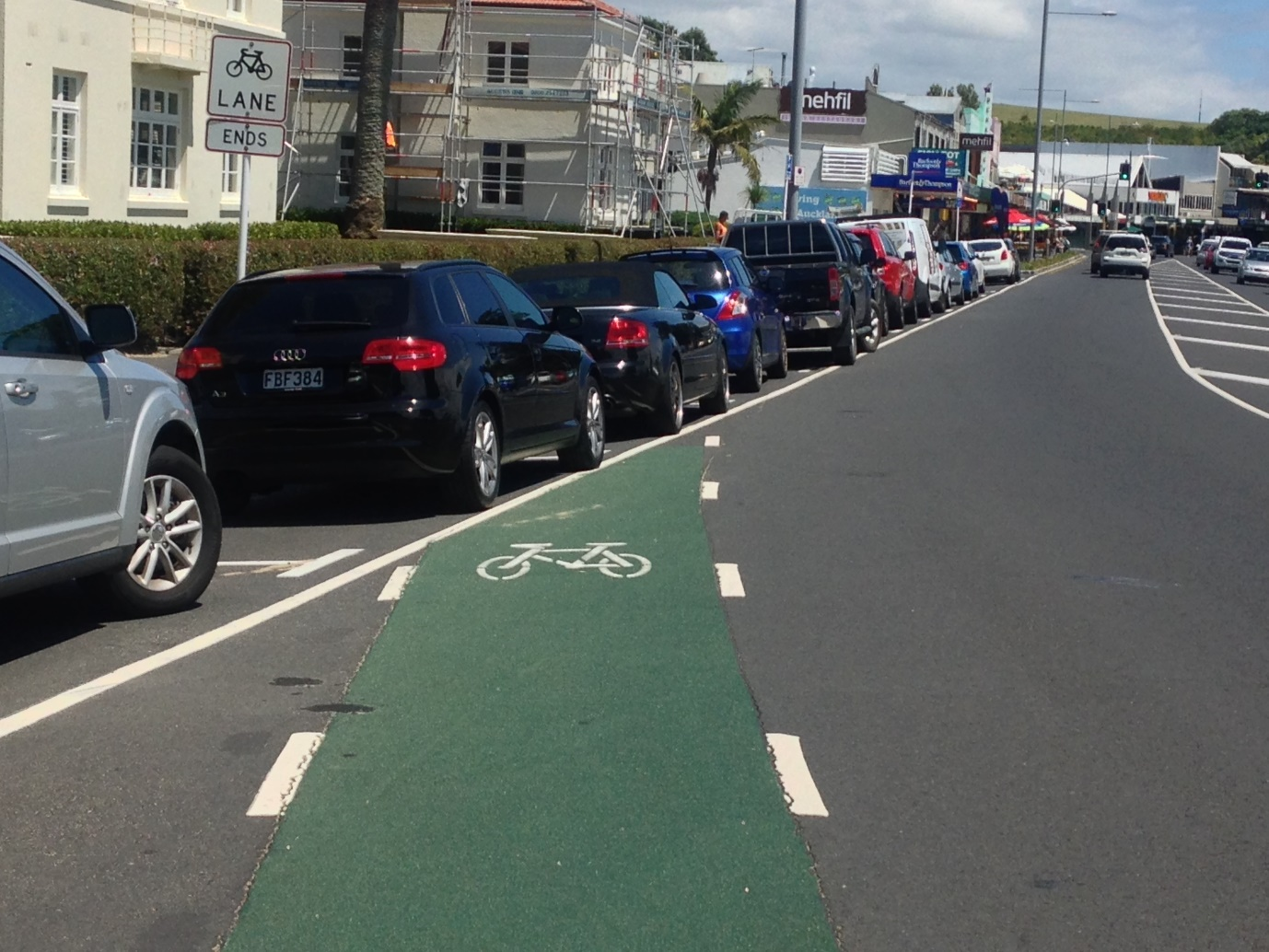 In the past the hostile conditions on New Zealand roads led to a vicious spiral. Car domination means fewer bikes, leading to greater fearfulness and increased resistance to road changes in favour of bikes. We need to turn this round.

The most powerful way to bring bikes back from the margin is to provide safe spaces for cyclists of all abilities to get to where they want to ride. Separated cycle ways are part of the fix, but not enough. There need to be changes on the road as well, such as slower vehicle speeds, better intersections, and wider shoulders to include cyclists. More people riding, and public spaces that celebrate two wheeled choices, will do two things – make cycling (even) safer, and reduce the fear of the bike.

Nutt, D.J., 2009. Equasy – An overlooked addiction with implications for the current debate on drug harms. Journal of Psychopharmacology. 23, 3-5.

7 responses to “Fear’s fair – but how rational is our risk assessment?”