Lost in Paris… the best way, by bike Getting lost in a strange big city is a great way to get under its skin. Getting lost on a bicycle in greater Paris turned out to be exhausting, but merveilleux! Kirsten Shouler reports on her recent adventures in the City of Light and Vélos:

Kim and I had been riding in the south of France, climbing a few mountains in the Alps and Pyrénées, and watching some Tour de France stages. We’d had day after day cycling in the baking heat, bathed in the summer aromas and tastes of rural villages, and welcoming the clear air and physical challenges of the big mountains.

Now the Tour de France was done and we were free of our cheerful Australian tour guides and friends – and on our own in Paris for a day or so. Bicycles are part of the romance and excitement of Paris, and on other visits we’ve found it easy to bike around the city centre both by using Vélib’ bike-share scheme, and our own bikes. We’d always fancied biking to Versailles, and were confident this would be a quick round trip – after all, it’s only about 25 km from Paris centre. From our hotel in Bercy, we’d need to head southwest through the suburbs of Paris. No worries, we’ve ridden around Paris before, and Kim, chef d’équipe, is good at navigation – and hey, Google maps always know where you are. How hard could it be?

Well, we made it to Versailles… but only after many detours, diversions, and some plain completely-wrong-direction turn arounds. Our ‘simple sightseeing trip’ turned into an epic circumnavigation of south Paris and back through the city centre, 90 km and 9 long slow hours on the road before we finally made it back, cold, hungry, tired, and jubilant. Our accidental extended tour had unexpected benefits – we got the chance to really see how the city works on a cycling level. As a tourist, you see people on bikes everywhere in the inner city – and it’s fun to try the bikeshare scheme to explore the usual spots, with Vélib’ stations everywhere. But our roundabout journey took us much further afield, though all manner of cycling facilities – fully separated Copenhagen-style lanes, on-road cycle lanes, shared paths, greenways and cycle-priority roads. How to express the pleasure of discovering separated and clearly marked cycle lanes and intersection crossings for cyclists that work well, all the way out to the edges of a big city, on a scale that would boggle Aucklanders? We set off at 6.30am to beat the traffic, on a dull grey overcast morning with a cold wind and passing rain – a bit of a shock after the 40º heatwave in the south of France. In our summer cycling jerseys, we were underprepared. Kim, being a skinny little grimpeur, began to shiver after the first shower. After a few false starts in the big traffic tangle heading east, we went south along the right bank of the Seine, crossing the river at Pont Nelson Mandela, through Ivry-sur-Seine past the Universitaire de Paris.

The generous Copenhagen-style separated bike lanes in both directions run for many kilometres and follow the light-rail route. It was magnificent to see morning crowds of students arriving at the university by light rail, by bike and Vélib’. With just a small amount of backtracking (and an emergency stop for a delicious hot chocolate and pastry from a pavement café), we left behind the luxury of the separated lanes as we headed towards Sèvres, up a steep hill – Paris has some very steep contours away from the river. Still, even as we travelled further away from the centre, most roads had cycle protection of some kind. Not all roads – and yes, there were big roundabouts and plenty of traffic, lorries, delivery vans and buses. But most Parisian drivers seemed to have an attitude of respect for cyclists on the road, at least compared to their Auckland equivalents, and we never felt intimidated. There were plenty of other cyclists on the roads and in the cycle lanes, too, and frequent well-used Vélib’ stations right through the suburbs. Eventually, the glittering gold roofs of Versailles appeared on our horizon and we zipped up to the gates through the herds of tourists on bike tours (guided bike tours are huge business here and everywhere in Paris, and lots of fun). The fleet of tour buses and armies of tourists – even this early in the morning – were too much, so we settled for a quick (and free!) ride around the periphery of the grounds. (A hire bike is a great way to explore the exquisite Palace parks at Versailles, and there are several places to choose from.) I got a peek at “Dirty Corner”, the controversial Anish Kapoor sculpture that has caused a bit of an uproar. Kapoor described the a huge steel funnel amid broken stone as “the vagina of the queen” taking power. I only saw it from a distance, so I couldn’t possibly comment.

Now we were getting hungry – and the weather was still chilly. But Kim wasn’t keen on stopping in Versailles itself (even though I always reckon touristy places mean ladies’ toilets, a very useful thing). With the idea of finding a delightful small village for lunch, we headed northeast through Le Chesnay and down a steep hill at La Celle-Saint-Cloud.

Biking alongside the river Seine on wonderful quiet riverside roads with cycle priority, we were easily seduced by the pleasure of being out of the traffic and – with the sun out at last – we continued cruising onto a quiet Voie Verte greenway. France has lots of these marvellous greenway networks and we were in heaven… but after a few kilometres riding through charming vegetable gardens and open farmland we reluctantly had to concede we’d gone far too far out into the countryside and even further away from the city. Sacre bleu – another backtrack! At Nanterre, a little roundabout café gave us energy-restoring deux penne aux trois fromages et deux Oranginas  (yummy macaroni cheese and fizzy orange drinks, for two, merci!). Then it was up another hill for a view of La Défense from Mont Valérian, and then a steep descent to cross the Seine on the Pont de Suresnes. We rode through to the Bois de Bolougne, where it was tempting to follow the large pelotons of racing cyclists streaming through this great park, which is part of a popular recreational cycling route for Parisians. But (after a brief cultural diversion of watching French police officers on mountain bikes arresting a colourfully dressed lady) we firmly stuck to our mission. Nearly home – we could see the Tour d’Eiffel! Through the Avenue de l’Hippodrome we rode, into busy city streets, braving the big roundabout at Trocadéro, and heading back to Bercy/ St-Émilion. Traffic is always heavy through the centre of Paris – but the easily-navigated separated cycle lanes, clearly marked road crossings and bicycle signal lights mean it’s actually easy to join the floods of cyclists on their own bikes or Vélib’s. 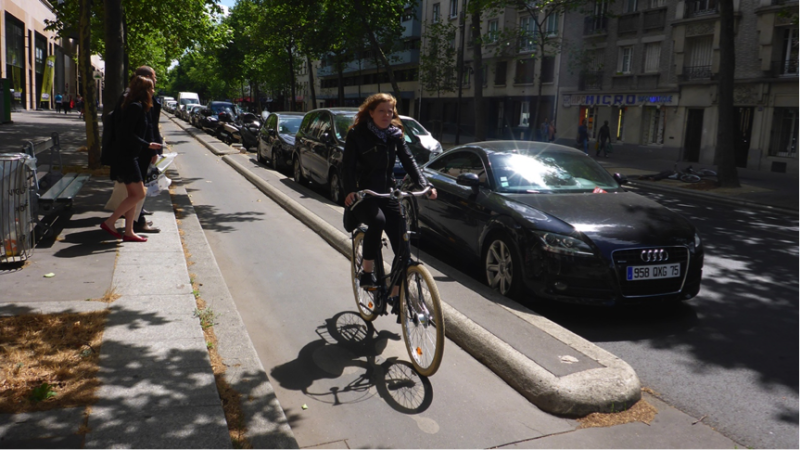 Triumphantly, we arrived back at the hotel about 3.30pm. After 9 hours in the saddle, that hotel duvet looked ever so inviting. Time for a short nap… before another round of delicious calorific French cuisine for dinner… truly, la vie en rose! To see where we went, here’s a map of our full route – including our many detours and backtracks. Cycling in Paris is highly recommended. But, please make up your own route! We’re clearly not reliable guides…