London’s FreeCycle – the key to the city on wheels

Linda Wong and family stumbled across London’s iconic FreeCycle bike festival while on holiday earlier this year. With the Auckland summer approaching, it’s time to wonder once again why Auckland hasn’t caught the worldwide citywide open-streets circuit-ride bug yet? Sure, there are logistical and budget issues with closing streets for through-traffic for a few hours for a Ciclovia or Summer Streets event – but the joy it creates is priceless. Will 2018 be the year Auckland really gets it? What do you reckon, Mayor Phil?

On a drizzly, overcast day in July, we set off on some hired bikes with 70,000 other cyclists to enjoy a car-free cycling circuit around central London. The FreeCycle is an annual, one-day event as part of the festival of cycling known as RideLondon. Rather than shy away from the busiest traffic areas of central London, the 8-mile-long FreeCycle route runs straight past a whole string of iconic landmarks. It was an exhilarating ride down the flag-lined boulevard of The Mall, past Trafalgar Square and Charing Cross. On the return journey we zipped along the northern bank of the Thames, looped over scenic Waterloo Bridge and back, then past St James Park to Buckingham Palace. As a family of two young children and two adults, we ended up splitting into two parties with one adult cycling at the pace of each child. I was with our four-year-old daughter, and she impressed us by being able to complete one complete 8-mile circuit on her little hired bicycle. At first she was a bit spooked by the sheer number of cyclists around us as we were cycling, but she found her groove and felt reassured cycling at her own pace next to me. 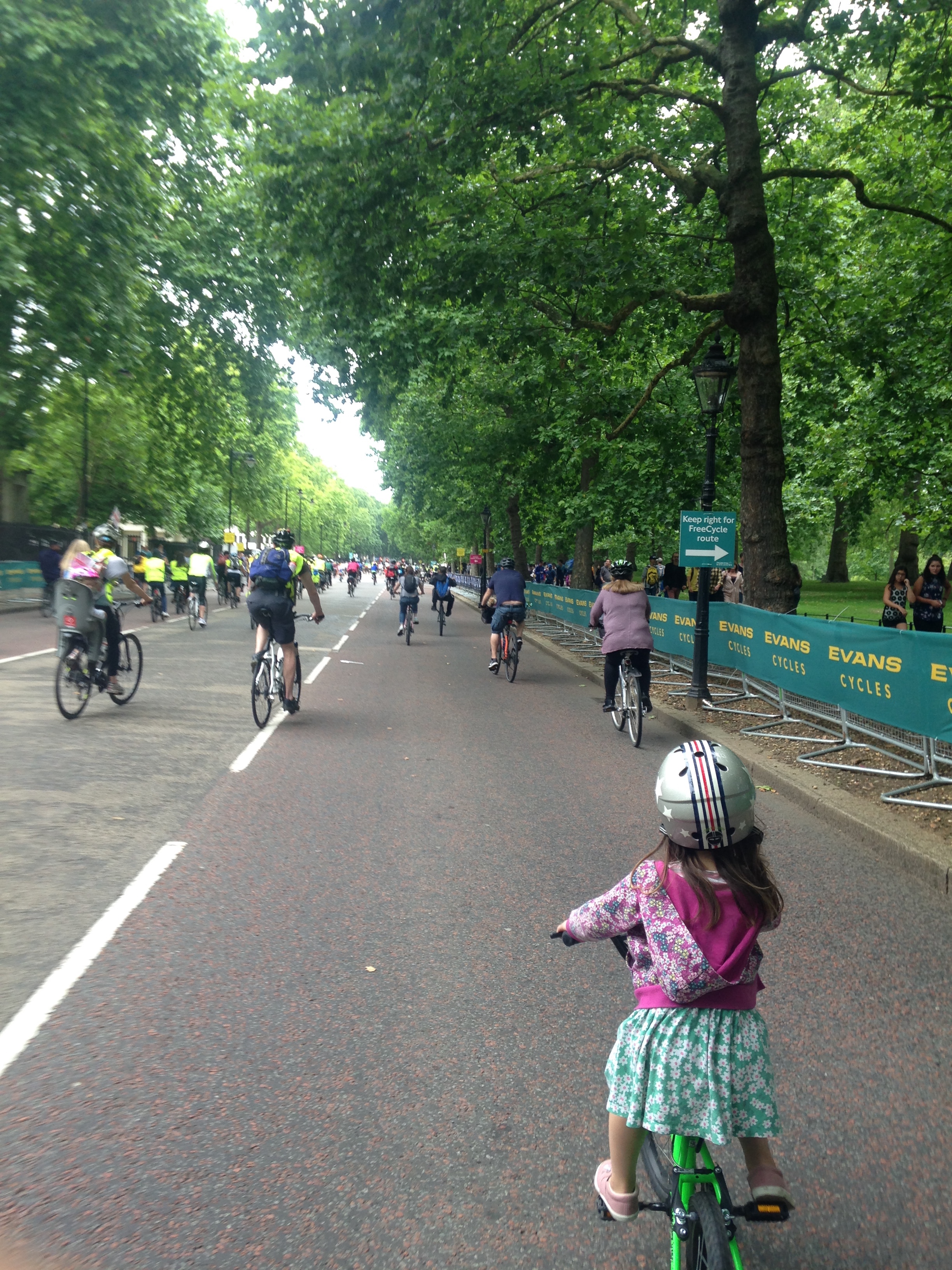 It was very noticeable that many of the participants were families, some with young children like ours, just enjoying being out on a bicycles. As the afternoon progressed, the drizzle intensified into patches of rain, but this didn’t dampen the enthusiasm or thin out the number of riders.

The route was very well defined along the way, with barriers to mark out the route and an army of support crew.  Festival Zones, with refreshments and entertainment, were set up in local parks along the route, with the largest Festival Zone converging at Green Park by Buckingham Palace.

Aside from the cost of hiring our bicycles, the FreeCycle was the best and most memorable free cycling event we have ever experienced as a family.

With the growing support for cycling in Auckland, there is a fantastic opportunity for an event like FreeCycle here.  It doesn’t even have to be an entire central city circuit – it could be trialed as a smaller loop in one neighbourhood, as they have in the popular CicLAvia events in Los Angeles. The CicLAvia events move around the city into different neighbourhoods, showcasing local businesses and also causing potentially less disruption to normal traffic flows.

Alternatively, a free cycling event could be incorporated into another one of the regular summer events that require extensive road closures in Auckland, like the Auckland Marathon or Round the Bays Fun Run. Even if we had to get up very early in the morning to ride a circuit before the main event runners show up, I believe that if a car-free cycling event was organized, the people on bikes would come!