Did we step up to innovate for cycling and urban spaces? A new walking, cycling and urban upgrade programme was announced by Waka Kotahi in the gloom and uncertainty of 2020. Surrounded by Covid mayhem of project budget blowouts and extended completion dates, we felt a bit like Cinderella stunned by the arrival of the fairy godmother.

This blog briefly recalls Bike Auckland’s experience of the programme and shares what we know about the future of the exercise.

The Waka Kotahi website describes ‘Innovating Streets for People‘, (ISFP) as trial projects ‘designed to reduce traffic and create more appealing environments for adults and children to walk, cycle and play; intersection repairs that improve safety outcomes and make it easier for people to cross; improve the vibrancy of business districts.’

The cycling sector buzzed with ideas for people-friendly, nimble, low budget, community-based trials. With 90% of the funding coming from the Agency, local transport authorities hustled to lodge their applications for the June and August tranches. 78 projects were approved across NZ, approximately half of them in Auckland involving schools, local streets and suburban commercial areas. 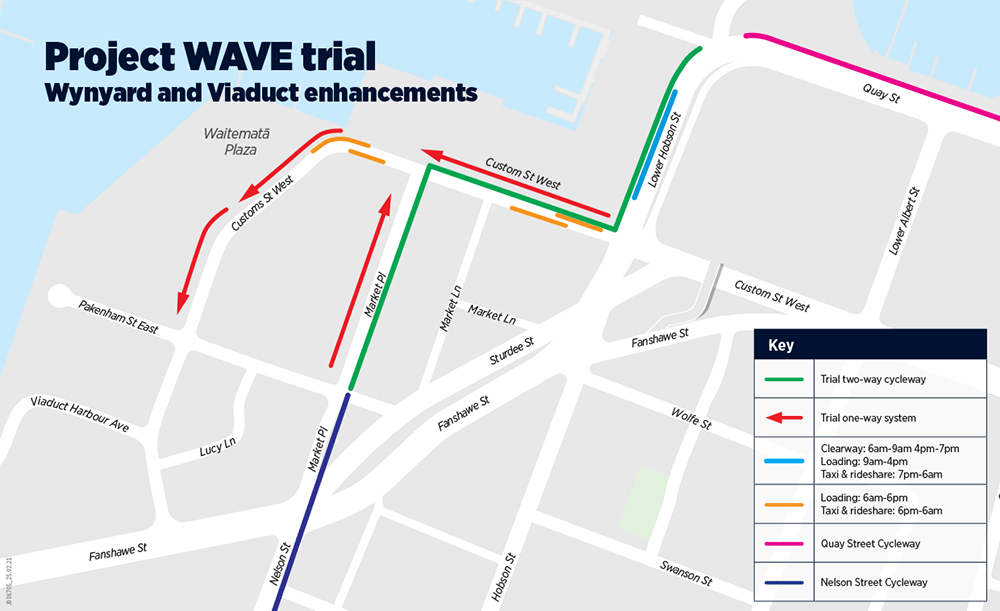 All projects were expected to include monitoring, community engagement and nimble changes to respond to feedback obtained during the trial. The funding for this phase ended in August but most of the projects are still on the ground either in full or partially retained only four were completely removed during or at the end of the trial. Assessment reports have been submitted or are well underway for Waka Kotahi.

We know already that some trials have been outstanding successes, and others ended early after public calls opposing them. Of the 78 projects, 81% were delivered and over 90kms of street changes implemented by the programme.

Bike Auckland’s experience of involvement in Project WAVE was interesting and valuable, at times frustrating and instructive. We’ve enjoyed being around the table with other members of the project working group, and are pleased to see the quick uptake and increasing use of the new cycleway and safer walking patterns.

In the recent NLTP announcement, it stated that a further $30million will be invested to extend the ISFP programme so we’ve been hanging out to learn what’s this means and what the future iteration of the programme will look like. We were delighted to catch up with Kathryn King, the programme director and her ISFP team in Waka Kotahi to hear more about this.

Although the future workings of the programme are still to be decided and will depend on the outcome of the evaluation, they did share a few key observations on what they’ve learnt so far and said they hoped to publish a programme report in late October, with separate case studies of successful projects. That’s an impressive turnaround!

Early data from some of the projects across the country includes a 19% increase in cyclists on the separated cycleway trialled in Christchurch and a 58% increase in people riding their bikes on the pilot cycleway in Cambridge, which is encouraging news.

It was great to hear the programme has been extended over the next three years and we look forward to hearing more about this before the end of the year.

Bike Auckland is impressed by Auckland stories of volunteer expertise dedicated by local people to help, plan, consult, prepare applications and work on projects to adapt them in response to public feedback.

The ISFP Team is offering to meet to present and discuss its report with local champions and others involved with the projects, which is great news. We applaud the Team for continuing to build the programme and reward the cycling and urban spaces sectors for embracing it with open arms.