Along for the ride – zooming in on the future of bikes Did you catch Simon Morton’s 7-part TVNZ series Along for the Ride on biking in New Zealand? All episodes are now available to view on demand at TVNZ online.

The whole series is brilliant, but our eyes were naturally drawn to Episode 7, in which Simon finally makes it to Auckland (via biking on the river with ducks in Hamilton!), to find out “whether the city of sails is also a city of cycles”.

He meets up with Pippa Coom and Frocks on Bikes, takes a spin with the Velociteers, discovers Diana Swarbrick changing lives at Bikes for Refugees in Mangere, and braves the city streets in a game of Alleycat with the fearless Jenna Makgill, two-time bike courier world champion!

Simon’s a big bike fan. Last year, an episode of his Radio NZ programme This Way Up focussed on people trying e-bikes – including the heartwarming story of 86 year old Ted Watson, who lost his drivers’ license but regained his independence and confidence with a new e-bike. Ted’s regularly out riding for three or four hours a day. “It has genuinely transformed my retired life,” he says. And running out of battery doesn’t worry him; as his wife Margaret points out, “If you don’t have a battery, you can use your legs.”

Speaking of electric-assist vehicles, check out this baby: the solar-powered ELF, from Organic Transit.

I discovered it via this story of a doctor in New Haven, CT who uses it to get to work. What the heck is it? It’s “a solar and pedal hybrid vehicle powered by you and the sun.” A solar-powered electric-assist bike with a roof on it. And apparently it can hold not just you (and a passenger, or two kids, if you buy the 2-seater) but up to 12 bags of groceries. Councillor Quax will be beside himself.

Keen to try one yourself? Turns out Deb King from Quikes in Raglan is importing them. The first batch are in the country already, and will be on the road in Hamilton, Raglan and Auckland over the next week. They’ll be available for rent [correction: for sale!], and you can see them at the Go Green Expo in Auckland on April 18-19. Deb reckons these things are “change makers”, and she’s not wrong.

I knew it reminded me of something, by the way: In fact, if you wanted to double down on your solar-pedal-powered clever vehicle for holiday purposes and the whole Busytown vibe, I wonder if you could attach one of these bike caravan trailers and hit the road? 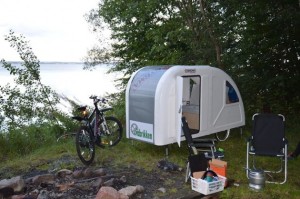 And what kind of a road would you hit? This round-up of imaginative bike path designs is fanciful and fabulous – some realistic, some not, but all of them a feast for the eyes.